Due to popular Customer Request, we’ve improved the HOURS fields in the Work Orders.

Previously, the HOURS line was just a text field, where you manually entered the title and times in by hand.

Now, the titles are all set up, and you just have to type in the times.

For printing, you have the option to include the hours, or print without hours.  You will see a few different buttons at the top of the Work Order.

Here is a printed Work Order that includes the HOURS:

We hope you find this new option useful.  Let us know your thoughts!

“Super Eagle Engine Conversion 1990 – 2019We have sold our Super Eagle O-470-50 STCs which will now be provided through NorthPoint Aviation of Brainerd MN.  In the future, you will see the engine marketed as the NorthPoint XP470.  For STCs and additional information including currently authorized engine builders, please contact Joe Birkemeyer at NorthPoint:  218 829-3398 joeb@northpointaviation.net”

We contacted Joe Birkemeyer (of NorthPoint) about it, some time ago, and this is what he told us:

“We do not have any AD’s issued specific to the O-470-50.  I would revert to the engine model that was used for the conversion to the Continental O-470-50 for the AD listing.  For example, if they used an O-470-R to convert, use AD’s pertinent to that model or if they used an IO-520-D for the conversion, use AD’s pertinent to that model. Thank you.

There’s some online chatter about the conversions.  Here’s one article on the subject:

Due to popular Customer Request, the “My Aircraft” portions of the service have been re-named as “Aircraft Profiles“.

You may notice that the URLs (web address) will remain the same, but the user interface, and navigation buttons will now say “Aircraft Profiles“.

Here, you will see Aircraft Profiles in the “Customize My Dashboard” page:

We hope you find these changes easy to adjust to, and we welcome your feedback.   Please let us know if you need help, or have any questions.

Change is rarely a welcomed thing, but is necessary at times.

To Customize your Dashboard:

Click the link at the top right that says “Customize My Dashboard“.

This take you to the Edit page.  It allows you to move the center display sections around in whatever order you like.

What are the sections?

You are accustom to seeing “My Reports” as the top section.  Now, at the top with the new Dashboard changes, “Aircraft Profiles” is at the top by default, but you can change that, and put “My Reports” back to the top if you like.

For Example:  you can mark My Reports as number 1, and move My Aircraft to number 2, if you like.

Check the boxes to remove any section you do not want to see.

We hope you find these changes easy to adjust to, and we welcome your feedback.   Please let us know if you need help, or have any questions.

(a) An application for an inspection authorization is made on a form and in a manner prescribed by the Administrator.

(b) An applicant who meets the requirements of this section is entitled to an inspection authorization.

(c) To be eligible for an inspection authorization, an applicant must—

(2) Have been actively engaged, for at least the 2-year period before the date he applies, in maintaining aircraft certificated and maintained in accordance with this chapter;

(3) Have a fixed base of operations at which he may be located in person or by telephone during a normal working week but it need not be the place where he will exercise his inspection authority;

(4) Have available to him the equipment, facilities, and inspection data necessary to properly inspect airframes, powerplants, propellers, or any related part or appliance; and

(5) Pass a written test on his ability to inspect according to safety standards for returning aircraft to service after major repairs and major alterations and annual and progressive inspections performed under part 43 of this chapter.

An applicant who fails the test prescribed in paragraph (c)(5) of this section may not apply for retesting until at least 90 days after the date he failed the test.

(b) An inspection authorization ceases to be effective whenever any of the following occurs:

(1) The authorization is surrendered, suspended, or revoked.

(2) The holder no longer has a fixed base of operation.

(3) The holder no longer has the equipment, facilities, and inspection data required by §65.91(c) (3) and (4) for issuance of his authorization.

(1) Performed at least one annual inspection for each 90 days that the applicant held the current authority; or

(2) Performed at least two major repairs or major alterations for each 90 days that the applicant held the current authority; or

(3) Performed or supervised and approved at least one progressive inspection in accordance with standards prescribed by the Administrator; or

(4) Attended and successfully completed a refresher course, acceptable to the Administrator, of not less than 8 hours of instruction; or

(5) Passed an oral test by an FAA inspector to determine that the applicant’s knowledge of applicable regulations and standards is current.

(b) The holder of an inspection authorization that has been in effect:

(1) for less than 90 days before the expiration date need not comply with paragraphs (a)(1) through (5) of this section.

(2) for less than 90 days before March 31 of an even-numbered year need not comply with paragraphs (a)(1) through (5) of this section for the first year of the 2-year inspection authorization period.

(a) The holder of an inspection authorization may—

(2) Perform an annual, or perform or supervise a progressive inspection according to §§43.13 and 43.15 of this chapter.

(b) When he exercises the privileges of an inspection authorization the holder shall keep it available for inspection by the aircraft owner, the mechanic submitting the aircraft, repair, or alteration for approval (if any), and shall present it upon the request of the Administrator or an authorized representative of the National Transportation Safety Board, or of any Federal, State, or local law enforcement officer.

(c) If the holder of an inspection authorization changes his fixed base of operation, he may not exercise the privileges of the authorization until he has notified the FAA Flight Standards District Office or International Field Office for the area in which the new base is located, in writing, of the change.

There is a Form attached to the AD that requires submission:

This is a long AD with a lot of reading.   To Login and view the AD, click here:

By popular request, the option to print the Appliance list within an AD Reports is now available.

To view this option:
1) Open an existing AD Report that contains Appliances.
2) One the left panel, click Print Layout Options, then select Appliance List.
It’s new, and untested, so please let us know if you run into any snags.

We hope you find this feature useful.  Your suggestions, and patience is appreciated, as we gradually work towards continued product improvement.

Let us know if you have any questions as you use the new print feature.

For those who like to cook, you might enjoy these recipes, based on WW II culinary creations, when riveting was job #1 of the ladies, and cooking took on a whole new form.

“Imagine the government telling you how much meat or chicken you could buy, or how much sugar or flour you could have. Strange as it may seem, at one time it actually happened. During WW 2, the United States government devised a food rationing program to help insure that every family would have enough to eat. Rosie’s Riveting Recipes gives a glimpse into life on the WW 2 home front. A cookbook and a history lesson in one with more than 180 economical, back-to-basics World War 2 ration recipes with short tales of life on the American home front interspersed throughout.”

Available on Kindle or Paperback, from Amazon:

Wishing you the peace and joy of the holiday season!

During the holiday season, our thoughts turn gratefully to those who have made our success possible. It is in this spirit that we say thank you and hope you stay safe and healthy. Merry Christmas to you and yours. May your days be merry and bright.
If it is on your heart to give, there are so many missions that serve those in need. If you don’t have a local group, please consider one of our aviation mission friends. Here’s are a few that would be grateful for your contribution:
JAARS – Bible Translation and Worldwide Delivery
MAC – Mission Air Care ‌
Wishing you and yours good health and blessings this Christmas season!
Our offices will be closed on Christmas Day and New year’s Day. In case of emergency, leave a voicemail or send an email. Messages will be checked occasionally over the holiday.
Thank you, God bless, stay well and enjoy the spirit of the season!

Merry Christmas from all of us here at Zook Aviation!

✈ Happy Wright Brothers Day! ✈
On December 17, 1903, the Wright brothers took flight with their first powered aircraft in Kitty Hawk, North Carolina.
The brothers took their manned gliding experiments to Kitty Hawk because the mid-Atlantic coast had stable breezes and soft sandy surfaces, perfect for landing those initial tests.
The Wrights determined the best location for their initial test flights by writing to the Weather Bureau, now known as the National Weather Service.
Joseph J Dosher, who worked at the Weather Bureau, promptly replied with the following response:
“Mr Wilbur Wright Dayton Ohio
Dear Sir,
In reply to yours of the 3rd, I will say the beach here is about one mile wide clear of trees or high hills, and islands for nearly sixty miles south. Conditions: the wind blows mostly from the North and Northeast September and October which is nearly down this piece of land. Giving you many miles of a steady wind with a free sweep. I am sorry to say that you could not rent a house here. So you will have to bring tents. You could obtain frame.
The only way to reach Kitty Hawk is from Manteo Roanoke Island N.C. in a small sail boat. From your letter I believe you would find it here like you wish. Will be pleased at any time to give you any information. Yours very respectfully JJ. Dosher”
The brothers’ first flight lasted 12 seconds and flew 120 feet. That day, they flew the glider three more times. Wilbur flew for the longest time that day, lasting 59 seconds over a distance of 852 feet.
Wilbur Wright testing a glider in Kitty Hawk, Oct. 10, 1902. Courtesy: National Weather Service 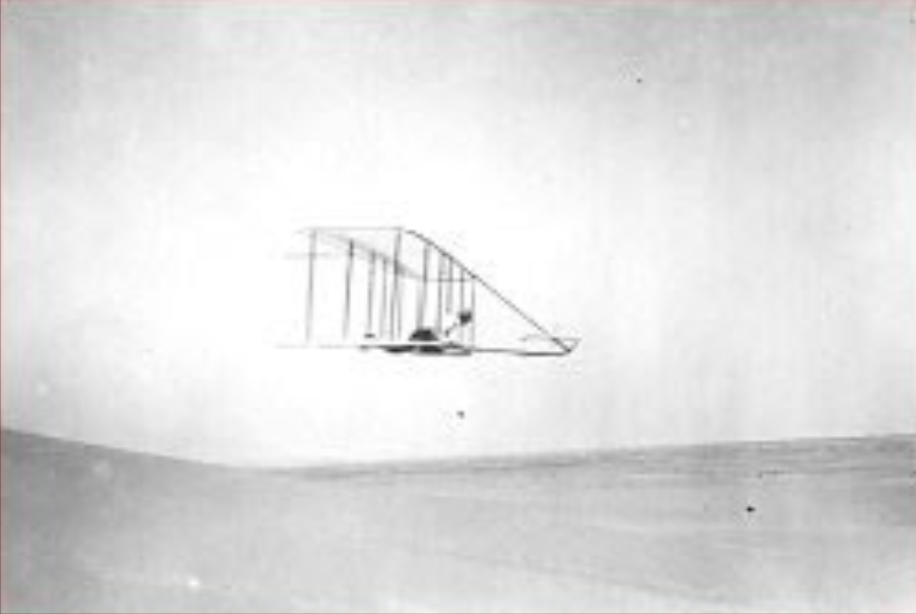 Once the flights were completed, Orville walked to the Kitty Hawk Weather Office to send a telegraph to his father, telling him about the day’s successes.
The telegraph sent by Orville Wright from the Weather Bureau Office in Kitty Hawk. The message informs their father about the successful flights of Dec. 17, 1903. Courtesy: National Weather Service 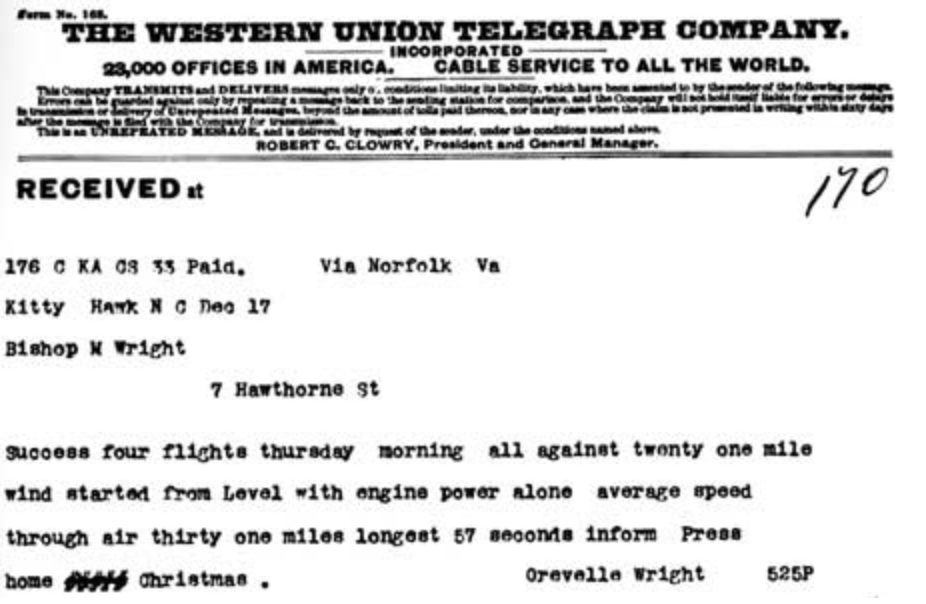 Listen to today’s episode of “This Day In Weather History” to hear more about the lead up the first aviation weather forecast, which occurred on Dec. 1, 1918.
The relationship between the National Weather Service and the aviation industry continues to be strong, providing daily weather forecasts for 537 airports.
https://www.msn.com/en-ca/weather/topstories/the-wright-brothers-telegraphed-the-us-weather-bureau-to-plan-1st-flight-locale/ar-BB1c0utp

Login to the AD Toolbox

Hot Off the Press